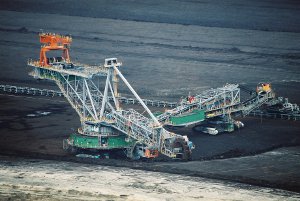 Disclosure: I own shares in Anglo American, Rio Tinto and BHP Billiton.

Half-year results from Anglo American (LON:AAL) today coincided with another lurch down for the commodity market, but I don’t think there was anything specific in the firm’s results to single it out.

(Lonmin is down 18%, but that’s another story — one which I plan to take a closer look at in another post in the next few days. I’ve viewed Lonmin shares as toxic for the last two years, but is it time to take a punt on this firm, which trades at around a 75% discount to book value? We will see.)

Getting back to Anglo, today’s results were broadly as expected. Underlying EBIT (operating profit) of $1.9bn was 36% lower than during the same period last year. This fall was simply due to commodity price reductions, which also prompted the firm to make $3.5bn of impairments, including $2.9bn at the Minas-Rio iron ore project.

The interim dividend was maintained, to some investors’ surprise. However with the prospective yield now at 6.8%, this situation can’t last forever. Unless iron ore prices, or perhaps copper and platinum, rebound fairly soon, a dividend cut seems inevitable, in my view.

The good news for shareholders is that Anglo is still profitable at an operating level. The firm also said today that it’s targeting a further $1.5bn of cost cuts during the second half, including $800m of operating cost cuts. An additional $1bn will also be cut from planned capital expenditure. These savings may go some way to help offset commodity price weakness.

Better still was news that the sale of its Lafarge business has enabled the firm to reduce net debt from $13.5bn to $11.9bn. This was much needed.

However, looking ahead in the near term, we have to accept that there isn’t much that Anglo CEO Mark Cutifani can do about commodity prices. He may also struggle to achieve an acceptable price for any asset sales, making this route unappealing.

On this basis, it makes sense to look at cash flow. Can Anglo remain self-sufficient without slipping further into debt? If so, then I may consider buying more shares and averaging down my holding.

Let’s take a look at the cash flow statement for H1 2015 (you can see the full accounts here):

At first sight, this doesn’t look too bad and suggests that Anglo did generate some free cash flow in H1. However, that’s not really the case, at least not from an equity investor’s perspective.

This is because from an equity perspective, free cash flow is only relevant if it still exists after a firm’s debt commitments have been satisifed. Remember that debt always ranks above equity. As Afren shareholders have found recently, trying to deny this basic reality can prove costly…

However, Anglo’s financing cash flows show that borrowing fell by a net $545m during the first half, and that the firm issued $2,159m in new bonds. We also know that net debt fell by $1.6bn after the half-year ended, thanks to the Lafarge sale.

The net effect of these refinancing activities has been to reduce short-term debt and moderately increase long-term debt. Pushing repayment dates further into the future is sensible, especially given that the firm’s newer borrowings may be at lower rates than the retired debt. I’d expect Anglo’s interest payment for H2 to be slightly lower than H1.

I’d also hope that some of the firm’s targeted operating cost savings of $800m will feed through to operating cash flow in H2. However, offsetting this will be the full impact of recent commodity price falls, many of which took place towards the end of the first half. Unless prices rebound during H2, my view is that operating cash flow is likely to fall again during the second half of the year.

It’s a complex picture with a number of moving parts. Assuming commodity prices don’t fall much further, my feeling is that the gains and losses will broadly offset each other during the second half. This will give a similar picture to that which we’ve seen today — cash flow breakeven excluding dividend payments.

Anglo does still have more than $7bn of undrawn borrowing facilities, so it isn’t going to run out of cash. However, it makes no sense for the firm to to use borrowed money to pay dividends for more than a short period.

I’m tempted to average down on Anglo next week, but will mull it over during the weekend before making a final decision. The big risk, of course, is that we haven’t yet seen the bottom for commodities…

N.B. 27/07/15: I’m not going to average down on AAL for now, as I don’t want to go any more overweight in commodities than I already am. But I would be tempted to expand a smaller position.