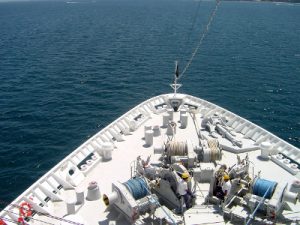 Disclosure: I own shares of Braemar Shipping Services.

The newest addition to my value portfolio is a company I’ve had my eye on for some time.

This is — I hope — a reasonably well-timed entry into a cyclical sector. Shipping is generally going through something of a weak patch at the moment, while the energy sector is beginning to emerge from one.

I paid 329p per share for my Braemar shares in October 2016 following the publication of the firm’s interim results. The share price has slipped to about 310p since then. I’ve sized the position to allow me to average down (or up) at some point, should I see fit.

Braemar Shipping Services has its origins in a shipbroking business founded in 1982. It’s since grown organically and by acquisition to have three divisions:

I’m sure it’s clear to you from this brief summary that Braemar’s fortunes are closely correlated with those of the energy sector,35 as well as the wider shipping market. Recent years have seen the shares fall by 50% from a peak of 580p in early 2014.

Earnings performance has also been somewhat disappointing. Margins have weakened over the last few years, as revenue has risen while profits have drifted somewhat. So what might Braemar have to offer value investors?

In my opinion, the cyclical nature of Braemar’s business means that it is unlikely to deliver smooth, progressive earnings growth. So my focus was on the group’s average historical earnings, via the 10-year average P/E ratio (PE10):

My one reservation here is that Braemar’s adjusted earnings have, in recent years, excluded a number of significant costs. Are these truly exceptional items? Last year, for example, the company included £2.7m of amortisation and share plan (i.e. remuneration) costs relating to the merger with ACM Shipping Group in 2014. I can live with the amortisation aspect, but as a general rule, I believe remuneration costs should not be treated as exceptionals. On the other hand, this probably was a one off.

The risk is that Braemar might be a chronic ‘adjuster’, delivering underlying profits that don’t bear much resemblance to reality. So to gauge the scale of Braemar’s exceptional adjustments over the last ten years, I also calculated the PE10 using statutory earnings:

Calculating two versions of the PE10 may seem like a chore, but i think it helps to provide an idea of how transparently and consistently a firm reports profits. In this case both versions of Braemar’s PE10 are very similar — and attractively low.

The divergence of Braemar’s underlying and reported earnings only goes back three years, and appears to relate to a handful of major deals. On this basis I’m prepared to accept the company’s underlying figures. I’d hope that the divergence between reported and underlying earnings will soon start to narrow.

Braemar’s net asset value per share has risen from 181p to 332p over the last ten years. I’m encouraged by this, albeit with the reservation that much of this value is booked under goodwill/intangibles.

I guess this is inevitable in a service business, but it does mean that we are reliant on the company’s own valuation of its assets — principally its people and the companies it has acquired.

In my view, this kind of business isn’t suitable as an asset play, so Braemar’s modest discount to book value didn’t play a part in my investment decision.

I used underlying FCF (which I calculated directly from the cash flow statement) to get an idea of the cash-generating ability of the company:

I also calculated a P/FCF10 including dividend, acquisitions and disposals to make sure that Braemar isn’t a cash-consuming monster. It doesn’t appear to be. 10-year average FCF was -£315,000 per year. Broadly speaking, Braemar has been cash neutral over the last ten years.

Both of these figures seem ok to me, but I was keen to get an idea of whether the company’s history of corporate transactions was creating value for shareholders.

My figures show that over the last ten years, Braemar has spent a net £51.1m on acquisitions, disposals and dividends.

So if we are prepared to trust Braemar’s balance sheet, the company’s spending on acquisitions and its choice of disposals have created significant value for shareholders. Remember that the £51.1m spending figure I cited included dividends.

This section will be pleasantly quick. Braemar has net cash and has done so since at least 2011. The level of net cash does fluctuate, and came close to zero at the end of August, but stronger cash generation is expected during H2.

So no major concerns here. Except…

Braemar currently has a forecast dividend yield of almost 8%. This is clearly alarming: all things being equal, it’s far too high.

Another worrying sign is that the firm’s payout of 26p per year (which costs the firm £7.8m) has been unchanged since 2011. A dividend that has been held for several years often indicates that the payout is too high to be comfortable.

So is a cut likely? I’m really not sure. As I mentioned above, a combination of working capital timing and improved hedging cash flows should mean that cash generation improves during the second half. Braemar also had £22.7m of unused credit facilities at the end of August, although I’m not keen on using debt to fund dividends.

Looking ahead, consensus forecasts suggest an adjusted net profit of £6.6m for the current year, rising to £8.8m for the 2017/18 year. Braemar’s management may just save the dividend.

Have I bought too soon?

I’m satisfied that Braemar is a reasonably well-run business that looks cheap enough to offer value at current levels. But I said that about certain commodity stocks in 2015, and was wrong. My main concern with this investment is that I’ve bought too soon.

We’ll find out more in January, when Braemar should issue a trading update ahead of the 29 February year end.

Until then, I’m holding.