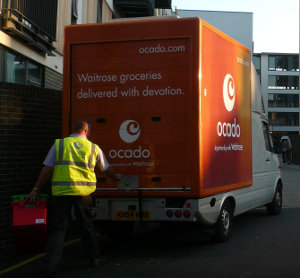 As Ocado Group PLC (LON:OCDO) continues to turnover vast amounts of money without making a profit, is it time for shareholders to follow the example of directors Jason Gissing Robert Gorrie, and cash in on the company’s record share price?

Ocado is something of an investment enigma.

The firm has never made any money, and its shares spent most of 2012/13 languishing below 100p — until May 2013, when Ocado announced a deal with Wm Morrison Supermarkets to provide an online food operation for the Bradford-based supermarket.

Since then, Ocado’s share price has quadrupled, but last week’s results suggest that much of this optimism has been overdone.

The firm’s business model doesn’t appear to work — despite a healthy gross margin of 30%, the firm’s costs mean that even with nearly £1bn of sales, Ocado can only break even at an operating level.

Although the Morrisons deal has yet to make a material contribution to Ocado’s revenues, it seems unlikely that the firm’s margins on Morrisons sales will be any fatter than they are on its own account sales — an assessment backed by retail analysts at Shore Capital, who believe the Morrisons deal won’t be profitable for Ocado until 2018.

I’m not surprised that after 14 years, Ocado co-founder and director Jason Gissing has had enough and is leaving to spend more time with his family and explore other interests.

Gissing (or rather a company registered in the British Virgin Islands acting on behalf of ‘The Jason Gissing Life Settlement II’ trust) sold £15m of Ocado shares on the day his departure was announced, leaving the former Goldman Sachs bond trader with a further 14m shares.

Although director dealings are not gospel, in my experience, large share sales by senior directors often presage a peak in a firm’s fortunes, especially when multiple directors sell at once, as happened here. Ocado non-exec Robert Gorrie, who has been on the board since 2000 (previously as Logistics Director), sold 40% of his holding in Ocado on the same day as Gissing, netting himself nearly £1.4m.

Gorrie is a transport and logisitics expert, so one explanation for his sale might be that he doesn’t think Ocado’s burdensome distribution costs are likely to fall anytime soon…

A recipe for a correction?

Ocado currently trades on a 2014 forecast P/E of 178 — a ludricous valuation for any company, let alone one that hasn’t made a profit.

In contast, online clothing marvel Asos — a consistently profitable company for whom international expansion is relatively simple, as its products aren’t perishable or temperature controlled and don’t require timed delivery slots — trades on a 2014 P/E of ‘only’ 97.

Although Ocado bulls have high hopes that the firm will roll out its model internationally, I’m not sure this will be quick or easy — a suspicion strengthened by Gissing and Gorries’ share sales.

Ocado’s share price has continued rising since its results were published, but I’m wondering whether this is simply a case of the overhang clearing from the two directors’ share sales: in my view, the company’s share price is ripe for a correction, and I’ve recently opened a small short position accordingly.

Update 21/04/2014: Not all valuation calls work out this well, but after a sticky beginning when Ocado’s share price rose above 600p, the firm’s valuation has fallen obligingly and netted me a decent profit. I closed my short position last week at around 350p, as while still massively overvalued, Ocado’s valuation is no longer completely insane (just plain daft :-).

Disclaimer: This article is provided for information only and is not intended as investment advice. The author may own shares or have a short position in the companies mentioned in the article. Do your own research or seek qualified professional advice before making any purchase decisions.