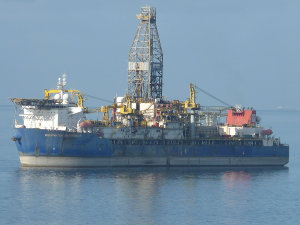 Ophir Energy (LON:OPHR) said this morning that together with its partner BG Group, it had secured an 18-month extension on its contract for the Deepsea Metro I drillship, which is being used to drill for its East African drilling programme, offshore Tanzania.

Ophir’s share price ticked up around 2% this morning on the news, which is good because it avoids the cost and possible delays involved in  mobilising another drillship from somewhere else in the world.

Ophir says that together with BG, it is “reviewing the immediate forward programme for Tanzania Blocks 1-3-4:

The likely sequence is firstly a satellite exploration well close to the Jodari discovery in Block 1, secondly an appraisal well and DST in Block 4. Thereafter it is planned to spud an outboard exploration well in Block 1 to test basin floor prospectivity by early September. A series of outboard prospects are presently being evaluated for this well.

Once this next phase of the Joint Venture exploration and appraisal programme has been completed, Ophir will take over operatorship of the drillship for exploration in Ophir’s Tanzanian Block 7, which is expected to target the substantial Mlinzi feature.

Given the firms’ track record to date, hopes will be high that these new wells will continue to enhance the commercial prospects for the Tanaznaia blocks.

The next news should come towards the end of June, when the results of the Ngisi-1 exploration well in Block 4 are known. Ophir estimates that Ngisi-1 could increase the mean in-place resource of the Chewa-Pweza-Ngisi hub to 5.8 tcf (4.1 tcf mean recoverable) and would also provide critical scale for gas aggregation and development from Block 4.

2013 promises to be a big year for Ophir shareholders.