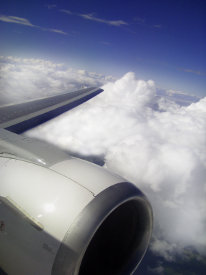 Disclosure: I own shares in Flybe Group.

Results update 10/06/15: Flybe published its final results for 2014 today. There was little to add to the April trading update, really: the recovery plan appears to be proceeding to plan.

Flybe confirmed an underlying proft of £16m, putting the group on an underlying P/E of less than 8. Operating cash flow was strong, at £30m, and net cash remained flat, in part because of a net £22m release of restricted cash. Average revenue per seat and load factor both rose, which was encouraging.

Net asset value fell from £194m to £140m, erasing the shares’ discount to book value, but £22.5m of this was due to the reduction in restricted cash, which is largely good news. Of the remainder, there were moderate increases in deferred income, provisions and derivative liabilities, although not enough to cause me any serious concern.

In an article for the Motley Fool last week, I touched on the attractions of niche regional airline Flybe Group PLC (LON:FLYB) as a value investment.

It’s a stock I’d been considering buying for some time, but as often happens, the experience of writing about it helped me clarify my thoughts and provoke a decision.

Here’s how and why I decided to add some shares in this small-cap airline to my SIPP portfolio.

1. An attractive business with a problem

With a market cap of just £123m, Flybe is a relatively small, simple business. This makes the investment case easier to assess in this case, I believe.

The situation is that Flybe’s underlying operations are profitable, but it’s lumbered with a number of surplus Bombardier E195 jet aircraft it can’t use, which are costing it £26m per year in finance costs. Flybe started out with 14 of these aircraft and has now got the number down to seven.

Removing this huge pressure on the business would reveal a much more attractive picture, in my opinion, and be likely to prompt a re-rating of the share price.

The firm’s year-end trading update appears to supports this conclusion:

Results for the full year to March 31st 2015 are anticipated to be in line with market expectations, with Flybe on track to achieve around break-even at pre-tax profit level, before the £26m cost of the E195 jets and any impact of USD loan revaluation, but after the Finland JV write down of £10m and EU261 flight delay provision of £6m.

Stripping out all exceptional costs, this implies underlying pre-tax profits of £10m or even £16m, depending on how you view the EU261 provision. (This relates to the court ruling that airlines must pay compensation for delays even in “extraordinary circumstances” like strike action, when they previously refused to pay).

If we assume a middle ground of £13m, then Flybe is trading on around 9.5 times underlying net profits.

That fits quite closely with the 2016 consensus forecast for the firm, which suggests net profits of £19.1m. This assumes that the firm’s turnaround continues to deliver in the current year and implies a 2015/16 forecast P/E of just 6.4 (see Stockopedia/Reuters for forecasts)

An additional attraction is that Flybe currently trades at a 25% discount to its last reported tangible book value of 75p per share. However, it’s worth noting that the likely reason for this is that this discount will be eaten away by continued cash burn due to the cost of the surplus aircraft.

Of course, having a profitable underlying business is worth very little if you don’t have enough cash to sort out your problems.

Luckily, Flybe is well funded. The airline had net cash of £49.7m at the time of its last interim results, and total cash of £149m.

Importantly, this means Flybe should have the time it needs to dispose of its surplus aircraft without having to take on extra debt to meet the finance costs.

Flybe’s generous cash balance is the result of a fundraising in March 2014, which raised £155m at 110p per share.

Shareholders who bought in this placing and open offer are now sitting on a 50% loss, but I suspect all of those who are going to sell have already sold, so I don’t expect the shares to fall much further unless new problems appear.

We should find out more soon, as last year Flybe published its final result on 11 June (it has a 31 March year end).

I don’t base my investment decisions on macro themes, but I think it’s naive to completely ignore the state of the real economy, a view shared by Neil Woodford.

Happily, times appear to be quite good for airlines at the moment.

Fuel costs are low and look likely to stay low for a while, allowing airlines to hedge in future years at attractive prices. The UK economy is showing some signs of growth, as are some key European economies.

I wouldn’t say we’re enjoying a genuine boom, but things could be worse.

While Flybe’s recovery has lagged behind that of larger peers like Ryanair and IAG, I believe the airline should still be able to capitalise on this benign trading environment.

Additionally, I believe Flybe enjoys some additional benefits, principally that some of its services are niche in nature and face less competition than the mainstream routes operated by budget airlines like easyJet and Ryanair, for example.

It all adds up to a value buy, in my view, hence my decision to add Flybe to my personal portfolio.

Let me know what you think in the comments below or @rolandhead on Twitter.