In my last post, I explained how I thought value investing principles could be applied to small-cap resource stocks.

I discussed two companies that I believe fit the mould in my post yesterday, and in this post, I’d like to look at a third example of a company I believe fits the bill. 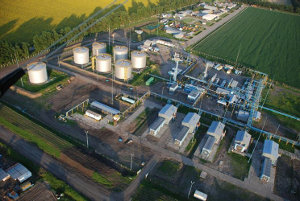 JKX Oil & Gas (LON:JKX) is an exploration and production company with a market cap of £113m and assets in Russia and Ukraine.

Today, you can pick them up for 65p each, following a somewhat traumatic period in the company’s history. This share price equates to a P/E ratio of 3 times 2012 forecast earnings, or around one-third of the company’s book value, according to the 2012 half-yearly report.

JKX is primarily a gas producer, with two major production assets, Rudenkovskoye in Ukraine (2P reserves of 155.3 Bcf) and Koshekhablskoye in Russia (2P reserves of 364.8 Bcf). The company also has a number of other small oil and gas assets, but these two are the key to improving earnings and cash flow in the near term.

JKX began production of gas from the Koshekhablskoye field in the first half of 2012. It’s currently carrying out an acidisation programme designed to increase output from the field, which is an old field formerly operated by Gazprom.

The firm’s Russian gas only made a “minor contribution” to revenues in the first half of 2012, but this should have risen in the second half and will hopefully rise again, once the current acidisation programme has been completed.

I would be remiss not to mention that JKX carries ‘Russian risk’ — the risk of state interference with its operations or profitability (through tax changes) — but I’m prepared to accept that in this case.

JKX’s main revenue stream comes from its gas production in Ukraine, which is sold into the domestic market, helping to reduce the country’s dependency on imported Russian gas.

The two main developments that could provide near-term upside in Ukraine are the recent capacity expansion of the firm’s LPG plant, which was setup in 2011 and has proved very profitable, and the planned multi-stage frac of JKX’s Rudenkovskoye field, which if successful could add up to 21 mmboe to the company’s reserves.

Fracking is due to take place in May and results are expected around late July 2013.

JKX also has a number of exploration prospects. In 2012, it drilled a successful exploration well in Ukraine that it was able to tie back directly to its main processing facility and place on production.

The firm has recently completed the acquisition of additional 3D seismic covering the same area, which it hopes will enable it to expand the production levels and lifetime of its Ukrainian assets.

No story of a small-cap resource stock would be complete without a look at its finances. JKX has just completed the issue of $40m of convertible bonds, which should meet near- and medium-term financing requirements and avoid the need for a dilutive equity raise.

JKX’s full-year results are due around the start of April and should provide some more information about how much progress the company made during the second half of 2012.

To me, it looks like the company is focusing hard on improving returns from its existing assets, and expanding them incrementally where there is a good chance of success.

This approach should reduce risk and hopefully will enable JKX to start generating cash once more — it’s hard to believe that for five years until 2010, it paid a dividend that was generously covered by free cash flow!